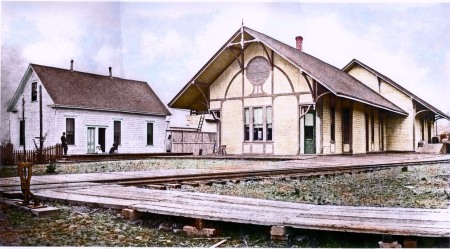 This is a great example of repurposing an old structure.
This old train depot is now the Depot Museum in Fortuna.   It contains all kinds of fun historic displays, as well as some historic documents for those researching genealogy or other specific topics.
The building was moved from it’s original location at the foot of 8th Street to Rohner Park (take first Fortuna exit and keep driving about 3 ish miles.  The park entrance is on the left).
A google search found me this photo, which has even more great period details.

I ran across this list   of  “bastard cases” while doing genealogy research for a client (my client’s family was not among them).

I was especially fascinated by the ongoing relationship between Abigail Johnson and James Hall.  I was reassured to see that Abigail was staying with family when her second “bastard” child was born.  I also wonder at the other men within whose homes these children were born (I am assuming that men with the same last names as the mothers are the girls’ fathers).

According to the site, the court tried to identify the fathers of illegitimate children so that they would be responsible for the child’s support.

END_OF_DOCUMENT_TOKEN_TO_BE_REPLACED

Valley of the Giants at the Eureka Theater

…If you …have the time, you should go see the two movies, both [versions of] Valley of the Giants, on Saturday or Sunday, December 12 or 13 at the Eureka Theatre. Doors opens at 5:30pm. They were made in this area…   The first one was done in 1927 and is silent. The second one you will see was in 1938. There was an earlier one, in 1919 and a later one, called The Big Trees, in 1952 [available on  DVD]. I am a student of the writer, Peter B. Kyne… Very interesting history.

Hero Bill Cardigan (Wayne Morris) is a lifetime resident of California’s Tall Timber country. When evil land-despoiler Howard Fallon (Charles Bickford) arrives with a team of lumberjacks to strip the territory of its trees, Cardigan tries to stop them, only to discover that Fallon has the law on his side. Eventually, Cardigan finds an unexpected ally in the form of golden-hearted saloon girl Lee Roberts (Claire Trevor), who enables the forces of Good to triumph in the final reel.

Hans Koster has put together a great website on “Sunny Fortuna” and given me the ok to use some of the photos they’ve got posted.

It is actually pretty easy to recognize this spot, as it is still the location where Hwy 101 crosses the Van Duzen River just south of Fortuna.

Notice the horse and wagon crossing …

According to the photo info, this bridge was built in 1901 and replaced because of corrosion  in 1924.

I don’t that a business strictly dedicated to the sale of meat would go over so well in Arcata today, but this sure is a great old photo.

If you click the photo, and then keep clicking, you’ll be able to enlarge it enough to see all the great detail. The ranch hand figures on top of the racks, hanging sausages, great brass lights, and even the photos on the door between the two men on the left….   The butcher block at the end of the counter on the right just looks like a piece of log sanded down and the weights at the far right of the scale were huge…

Initially, it was the fawn that caught my attention in this photo, posing (sort of) among a group of people.
Later, as I studied the picture, I noticed the mix of white and Native American women with the men.

Often I think (fear) that in the early days, native wives were ostracized from the white population and white female social circles. This photo gives me hope that this wasn’t always so.
I would so love to know more about the people in this photo…

I’ve fallen down and I can’t get up

Okay, maybe every once in a while there is a building that can’t be saved.  The source of the photo was Humboldt State University, so this was likely around here somewhere.

It also looks like silt has built up around the front of the first building… Flood?  Exceptionally high tide?