Killing a gym full of children

This week marks the 150th anniversary of the Indian Island Massacre.

While I know this anniversary is being recognized by tribal members and others , I think it is most important to remember that that those killed were people,  and not just “Indians”.

John Grisham wrote the book, A Time to Kill, about a black father in the deep south who kills two white men that raped his daughter.

Through much of the book, race is the overarching issue.  The death of two white men at the hands of a negro.  Two of “us” killed by one of “them”,  and it is only when the jurors are urged to imagine the victim as a little white girl and her father as a father, instead of a black man, that they are able to sympathize.  They are finally able to recognize a family who suffered a great injustice they simply could not abide.

If one hundred and fifty school children and their mothers were brutally murdered during a school event, everyone in the community would recognize the loss years later. This massacre, one of too many that happened in this area during the settlement period, should be no different.

If you have to, picture a school gym full of parents and children. Imagine a basketball game or school play, everyone joyous, the community together.  Then imagine five or six men coming in and locking the doors behind them.  They are carrying hatchets and knives and you watch from the stands as cheerleaders with ponytails and  boys with long legs and hair in their eyes are struck down, their skulls split with axes, screaming as they fall bleeding and dying to the floor.  Imagine toddlers, who moments earlier, were crawling on the stands, stabbed and cast aside.  Imagine watching as parents are beaten and killed as they run to protect their children.   Imagine the community’s  pain.  Imagine the loss of so much potential. The loss of so many people…

This happened.  Here.  And it makes no difference that they were “Indian”.  Please take a moment to honor the victims and their families.

On Sunday my husband and I attended the annual Humboldt Historical Society Luncheon, and in a silent auction I “won” a series of books written by Peter Palmquist and Lincoln Killian.  The books focus on the history of local photographers, and though I’d seen them before, I  hadn’t realized they also contained a lot of great local history.  Great, well written, local history.   This sounds terrible, but I figured they weren’t written by Palmquist and on a hunch, I successfully tracked down the co-author, Lincoln Killian.   Killian had, indeed, written most of the text for the series.

We chatted for a while, and as I always do, I shared the story of Lucy.  He remarked, rather surprised, that he hadn’t heard the story before (though he worked in the HSU library’s Humboldt Room and spent years steeped in local history).  He said that it was important to share the stories that no one knows…

I work with a lot of clients doing marketing and public relations projects and last night I attended a workshop on Social Media (Facebook, Twitter, etc.) so that I could do more in that realm for my clients. I did pay attention (at least some of the time), but mostly I thought about the murder of James Casebeer and the lynch mob killing of the two Indians accused of the murder.  Two Indians named Jack.  I realized that I need to tell their story and I will start by doing it here. 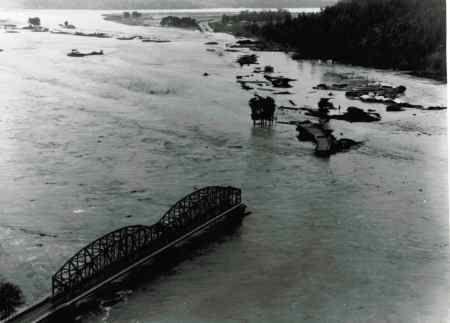 I figured I’d get another flood photo in to go with the theme (though if we don’t get more rain soon, I think I’ll have to hunt for drought pictures…).

I grew up in Rio Dell and watched part of one of the north bridges go again in… I think it was the winter of 1986.   Trees and stumps and other debris began to pile up on one side of the bridge, and I wondered why they didn’t get a crane in there and remove it all (anyone could see that the bridge wouldn’t withstand the force).  At the time it didn’t occur to me that there might not be a crane that big in Humboldt County.  And if there was, that such an operation would be way too dangerous.   And so the river took the bridge.

I know floods are expensive,  and tragic for those who get injured or lose their lives, but  that much water is… awesome.  When I was young, during flood events I’d watch whole trees float down the Eel.  Our house was above the river and we had a great view.

We get all caught up in controlling our lives, but all it takes is one natural “disaster” to remind us of how powerless we really are.  I find it very humbling (and a bit of a relief, actually) .

If the rains don’t stop

Ok, I guess the rains have to start first…

Scotia Inn, then and now

Hasty loveless union with no escape but death

Marriage ought always be a matter of choice. Every girl ought to be taught that a hasty loveless union stamps upon her great dishonor, and that however dreary and toilsome a single life may be, unhappy married life is tenfold worse–an everlasting temptation, an incurable regret–a torment from which there is no escape but death.

This is quite ironic given all the forced “marriages”  endured by local Native American women during the settlement period.  I’ve come to realize that many of the women in those situations were incredibly courageous.  They endured, had and nutured families.  Fortunately, there were even some,  like Amelia Lyons  (per Susie Van Kirk), who  did enjoy loving and caring unions with their white “husbands”.

And for the most part, like it or not, it is the descendants of these unions that make up a majority of our local Native American population today.

Barefoot boy with a store-bought lunchbox