The fight between celebrated writer Jack London and Stanwood Murphy, son of Pacific Lumber Company owner Simon Murphy, at Eureka’s Oberon Grill in 1910 (or 1911) is the stuff that local legends are made of. According to a letter written by eye witness Hap Waters, the fight started over politics and ended with both men in the hospital recovering from their wounds.

Stories of the fight fail to mention that London’s wife Charmian had traveled with him to Humboldt and that Eureka was only one of many stops the adventurous couple made along the west coast during that time.

The Huntington Library has an amazing collection of London’s photos, including many from Humboldt County. More coming soon….

Eyesores of Eureka: The Carson Mill in 1966

I’ve posted about the Carson and Dolbeer Lumber Mill, but recently ran across this photo cataloged under “eyesores” on the HSU Special Collections website.

Fortunately the city of Eureka has been working hard over the last number of years to clean up these “eyesores” and this site is much improved as the parking lot for the city-owned Adorni Center on the waterfront. Thanks Eureka !

Just another reminder that even when things look bleak, better days do come….

Humboldt’s Historic Photographs and the Stories They Tell

In the midst of these challenging times, this class is strictly fun.

Delve into the history of well-known and familiar Humboldt County sites and events. Discover the fascinating local history of these places, and see how structures and landscapes have evolved over time.

2020 note: When we recently gave so much love to Daly’s, many folks mentioned Bistrins. Here you go…

Driving through downtown Eureka the other day I thought I spotted an old blue and gold plastic Bistrins bag dancing in the wind.  It was really just one more piece of discarded trash but it made me nostalgic for some of the old stores that just aren’t around any more.

The following comes from the Times Standard archives:    Harry Bistrin — Longtime Humboldt County residents will immediately recognize the name “Bistrin.” Bistrin and his brother Herman owned and operated 23 retail clothing stores known as “Meyer Bistrins,” carrying on a family business that his parents, Lily and Aaron Bistrin, started in Eureka just six months after his birth in 1927. After retirement, Bistrin served as a top aide to state Sen. Barry Keene and district representative for state legislators Virginia Strom-Martin, Patty Berg and others. He died May 19 at the age of 83.

I’ll attach more Bistrin info at the end of the post, but here is Fortuna’s Meyer Bistrins on the left (photo credit to Hans Koster of sunnyfortuna.com.  He actually dug this one up for me by request. Thanks Hans !) Oh, and I just noticed Bon Boniere FOUNTAIN on the right…

And to add to my list of serendipitous history happenings:

I finished a first draft of this post early last week and then stopped at a yard sale last Friday where I found this:

I am sure the woman manning the sale thought I was crazy to want it but I just couldn’t resist.

Harry Bistrin died in his sleep early Thursday, May 19, 2011, at age 83 in Eureka, where he grew up and lived until moving to the Ukiah Valley more than 20 years ago.

END_OF_DOCUMENT_TOKEN_TO_BE_REPLACED

Carson Block – Then and Stucco and Now

Notes from 2020:   This is another of my favorite posts highlighting a true architectural treasure in Old Town, Eureka (with some added 2020 notes)….

Here is a story the Lost Coast Outpost did about the restoration work.

And this story by Kathy Dillon for the Eureka Heritage Society’s Architectural Legacy newsletter gives the most detailed information about the building’s history and restoration. This also includes some great photos of the building’s original Ingomar theater.

Please click on the photos below to enlarge and see details. 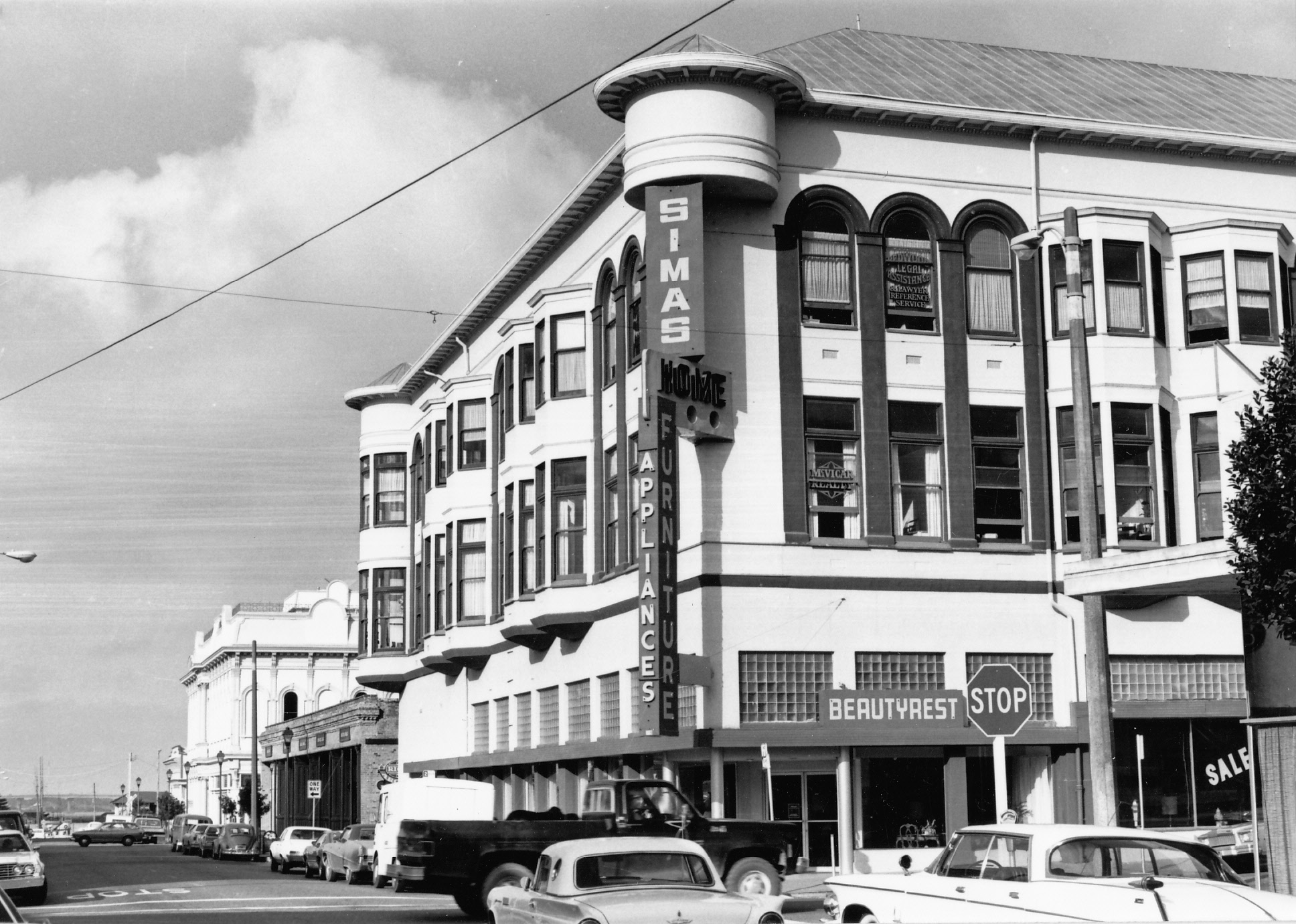 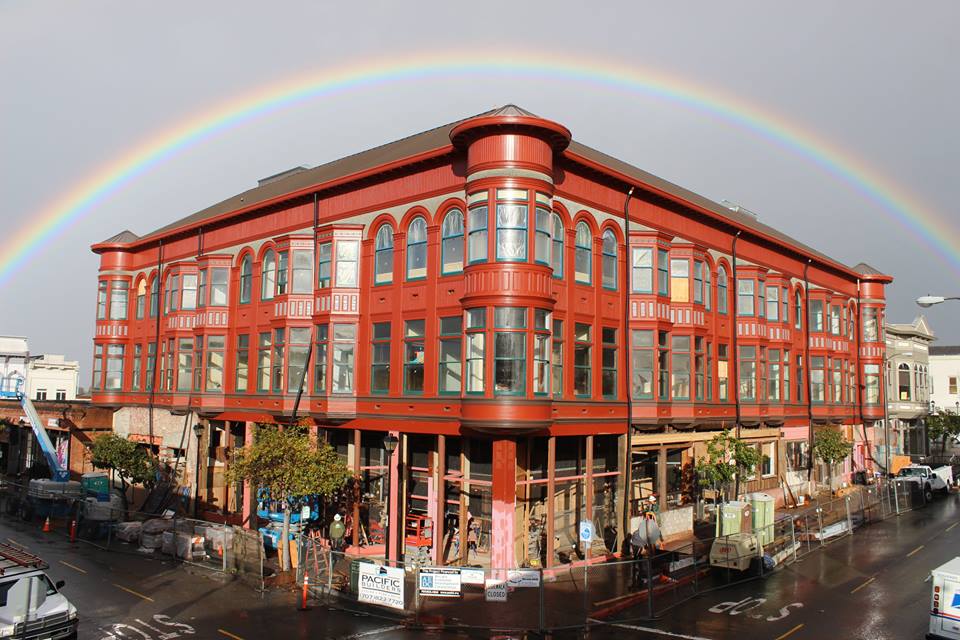 The building is quiet now, but that will change….

I saved this one for Friday- so you can explore it over the weekend….

Google has digitized this fun.

Eureka Business Directory 1893-4: A Complete Register of the Citizens of the City of Eureka, Humboldt County, California

You can look up your great-grandparents  or see that you could get “Humboldt Pure Lard” in 100 lb. Kegs.

Please note that you can customize your display, or how you view the book online, by clicking display options on the upper right hand corner of your screen. 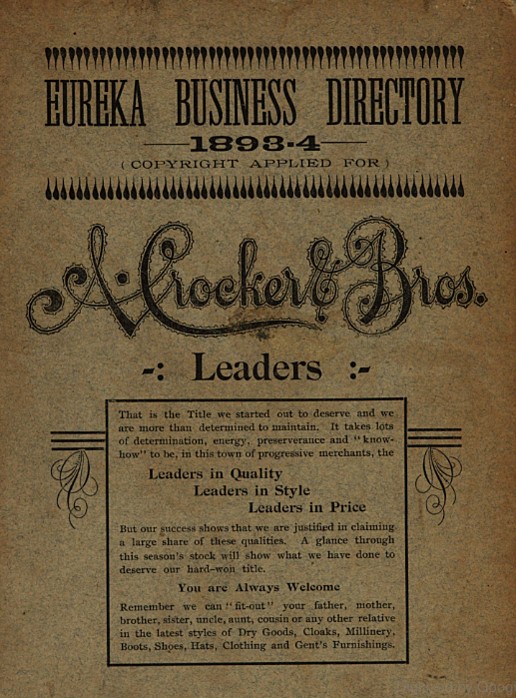 Back to 2nd Street, Eureka…

I was distracted the other day by my discovery of an Armory Hall in Old Town Eureka on 2nd Street between C and D, but now back to the basics…

I’ve always loved that Fairwind sign on the side of the building, but apparently it isn’t that old….

It looks like the Armory was gone by 1920- but there were a LOT of saloons so still plenty of places for drinkin’. Whew…

It doesn’t look like  many of the original buildings are left, but there are a few… 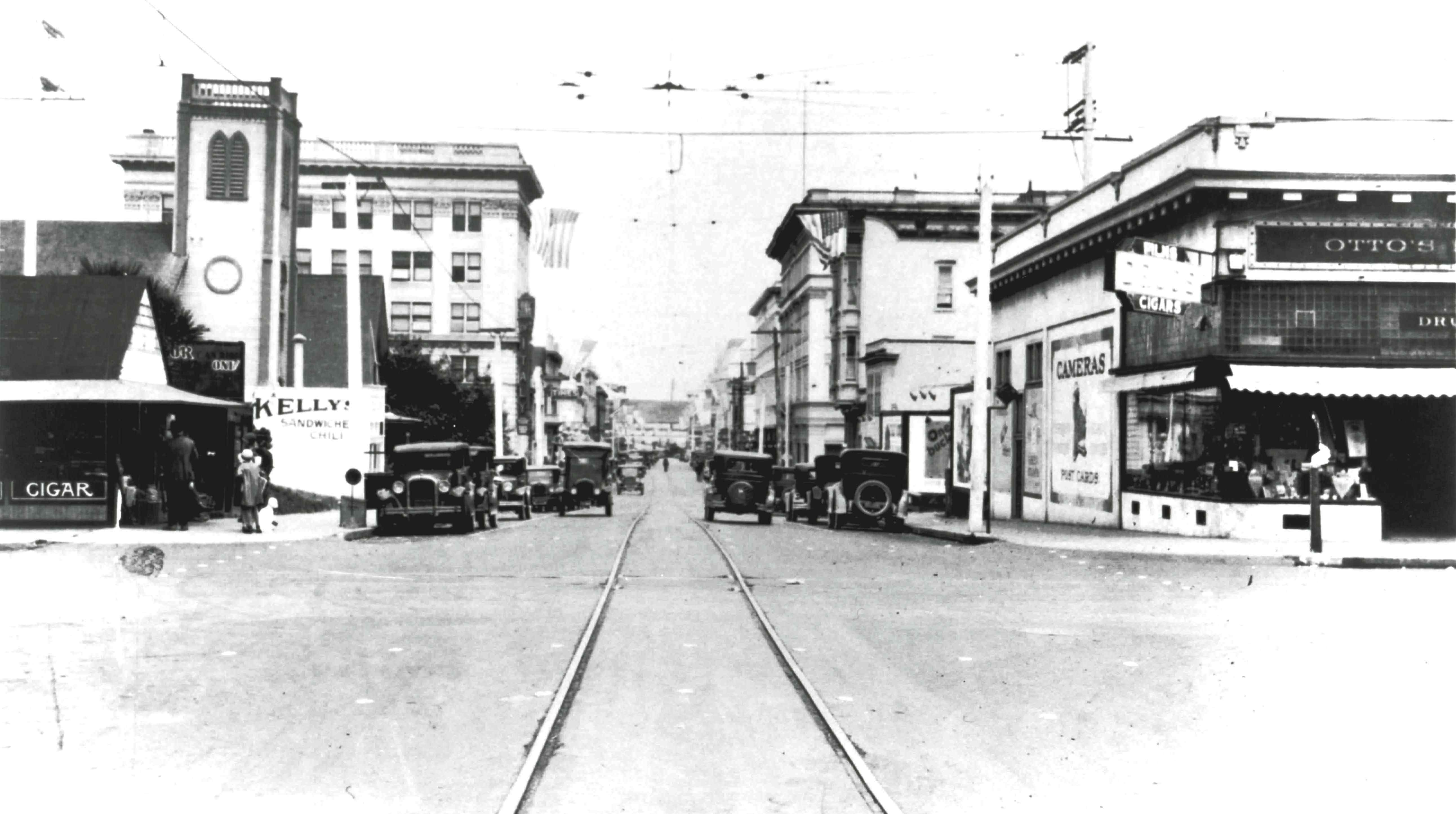 And there’s another streetcar track…

Below are Sanborn maps from 1920- so a little earlier than the older photo, but not much….

You can see the church steeple on the left – and it looks like the house (structure) was still there in 1929, though Kelly moved in a sandwiche [sic] and chili shop- and the house may have been selling cigars. Interesting that there was an auto wrecking yard by 1920 (map)

As always (hopefully) please just click to enlarge the media…

Eureka as painted by a soldier in 1854- Please click on the painting to enlarge.

When the first Euro-American ships arrived off Humboldt Bay in the spring of 1850, those onboard witnessed a spectacle that we can only dream about.

“I must now tell you that the land is so beautiful and the soil so rich that I was almost fascinated with the scene, and if I could have you and Ginney, Rachel and our family, with some of our valued friends, I could almost give up Erie. In addition to the good qualities of the land, the waters produce clams in abundance as well as fish; and geese, ducks, snipe, plover, etc. are about as numerous as wild pigeons at Erie in the spring. The wood is not less productive than the water and droves of elk and deer, with a goodly number of bears are always to be found….” (Lewis, 1966)

Captain Douglas Ottinger, on board the Laura Virginia, in Humboldt Bay, April 1850, to his “Good Wife,”

Note: Susie Van Kirk was an amazing and generous historian and a wonderful human being. She passed away in 2016 and I miss her still….

Arcata Boardwalk and Other Things, c. 1930

Please click on the photo to enjoy the details 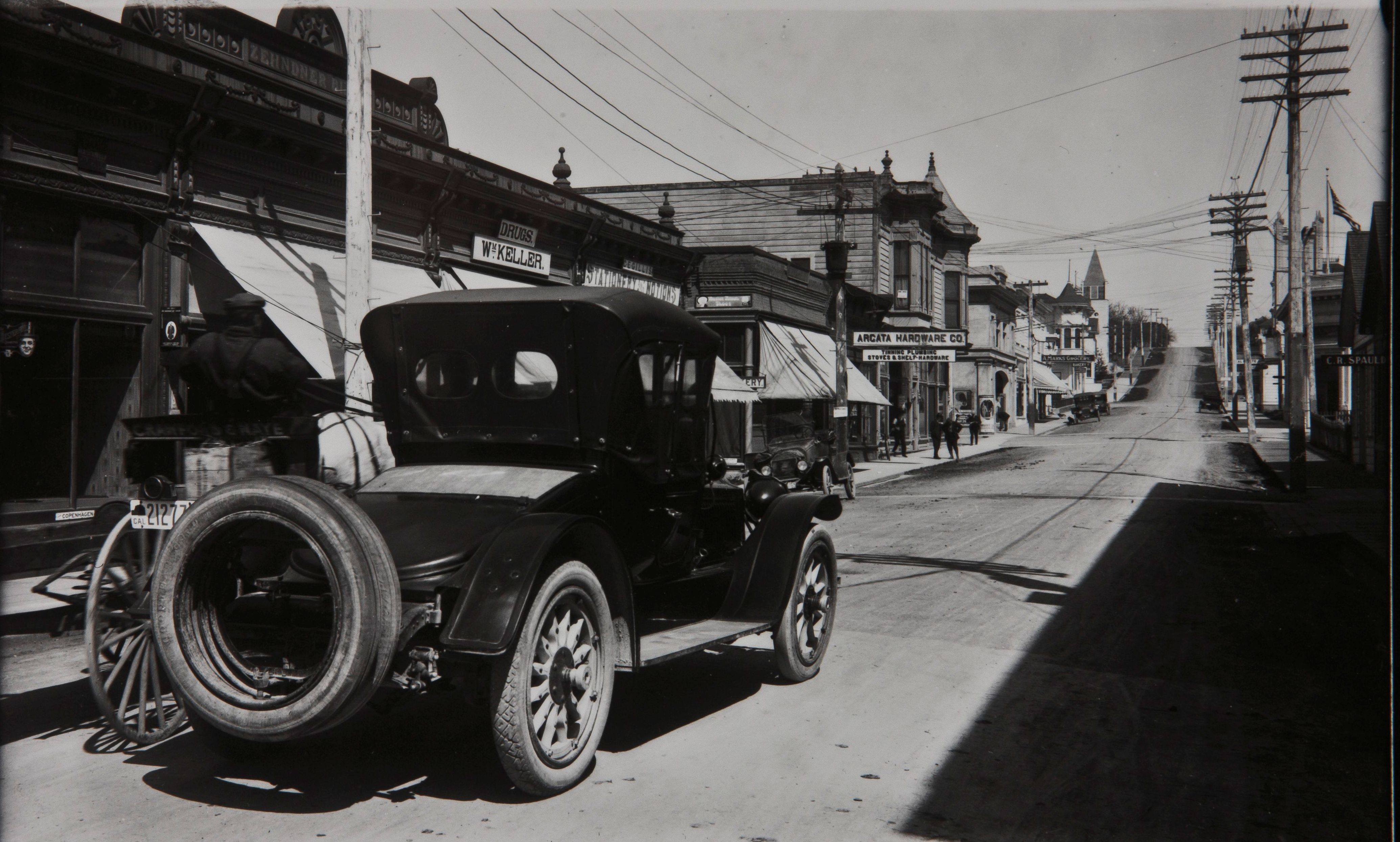